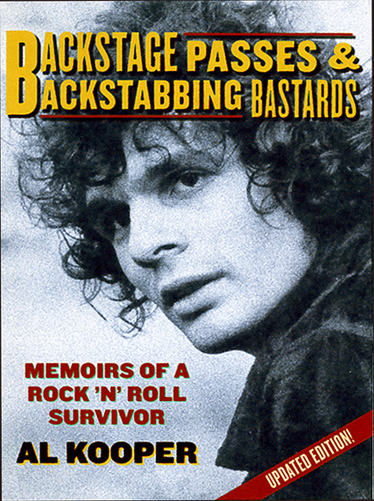 After years of waiting and watching out of print copies go for over $200 on EBAY, I am pleased to announce the third publishing of my autobiography back on March 4th, 2008!

Here are some reviews of the last edition. The new one is updated to 2007 and as you can see, has a new cover.

WHAT THEY'RE SAYING ABOUT "BACKSTAGE PASSES & BACKSTABBING BASTARDS":

"Perhaps the single most entertaining rock book of the year."
DALLAS OBSERVER

"The book is put together like after-dinner conversation with someone who has been at the center of rock and roll for forty years. Read Kooper to get what you need!"
PLAYBOY MAGAZINE

"This is a man who lives for music and seems to attract outrageous and often hilarious experiences in the process. His tales are both wonderfully crazed and technically fascinating.."
EQ MAGAZINE

"From his work on Bob Dylan's classics to the best of The Rolling Stones, Al Kooper has been a musical Forrest Gump, turning up at many of the great historical moments in rock 'n' roll. Now a professor at Berklee, he looks back at his tumultuous life as a rock star..."
BOSTON MAGAZINE

"So who's Al Kooper? He's not only a funny guy whose life story is a you-just- can't-put-it-down read......Kooper is one of the greatest behind-the-scenes performers and producers in rock music history. Read and watch your jaw drop!"
RAPID CITY (SD) JOURNAL

"This is above all, an entertaining read.....Kooper is a funny guy, an equal opportunity puncturer of pretension, including his own....Wherever rock history was being made, he (Kooper) was in the vicinity....."
MOJO MAGAZINE (UK)